Home / About / History
In December 1889 the vessel “Wick Bay” ran aground, and despite efforts to refloat her, subsequently broke her back and became a constructive total loss. This resulted in a significant claim against the King’s Lynn Corporation, who were the Conservators of the Harbour and approaches and had to raise the money to remove the wreck from the Channel.
This disaster led to the King’s Lynn Conservancy Act of 1897; whereby a Board representing local interests was appointed to safeguard the river, deal with the safe marking of the channel, collection of dues and the removal of wrecks. Later the Board also became the Pilotage Authority. 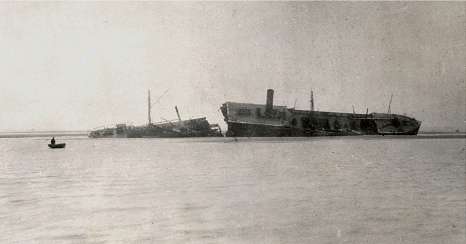 The King’s Lynn Conservancy Board, hereafter called the ‘Board’ is a Trust Port, a self-financing, non-profit making organisation, deriving its income from users of the Port of King’s Lynn, and Navigational marks in the Wash. It receives no financial assistance from the Government or the Local Authority, but like any other commercial concern it relies on balancing income in relation to expenditure for its successful operation.
Associated British Ports operate and have jurisdiction within the enclosed Docks, the Riverside Quay and the Fisher Fleet.

Pontoons for visiting leisure craft are situated at South Quay 5. Booking before arrival is essential as there are a limited number of berths. Maximum draft is 1.5 metres. Visit sailthewash.com, call tel:01553 774297 or email visitorpontoons@west-norfolk.gov.uk

The King's Lynn Conservancy Board is the Statutory Port, Harbour and Pilotage Authority for King's Lynn, providing the pilotage and towage for the Port of King's Lynn.